Remove the automated tests that do not provide any value

- May 20, 2018
Most blogs on test automation are about how to add more and more tests to your automation suite, but rarely does anyone mention that you also should consider removing automated tests, especially those that do not provide any value.

If you are on a new and relatively fresh project, you probably focus most on adding automated tests across different layers, focusing on automating regression testing certain parts of your service that you create. As your service mature, you probably have built up a good chunk of automated tests and you keep on adding more and more automated tests as new parts are added. Now instead of 10-15 minutes, your test suite perhaps need 20-30 minutes to run, and it becomes heavier and heavier to regression test new code. (This can probably be solved by other means of course, but consider this an example, there could be more reasons why you have a test-heavy delivery pipeline)

Seldom does one consider the possibility of removing tests, not only in order to reduce execution time, and delivery time, but in order to re-check what is actually the value these automated tests give us. Previously some of these tests could have provided much value for the team, but as the service matured, and evolved, are these tests covered by other tests, or do we need to check all part individually?

What if the tests are unstable, and fail often? If we do not trust them, why should we keep them? Are they just there so that we can say we have covered x% of the entire code? Unstable tests are perhaps the worst there is, as they not only take time to execute, usually we also need to spend time to investigate why did they fail, but if it ends in a comment like "those are usually failing, just ignore them and move on", or something similar, then that is a pretty good sign that you should definitely remove them.

So consider from time to time what do we actually regression (automate) test, and can we remove some of these tests, the same way as we remove obsolete and unused code.

Popular posts from this blog 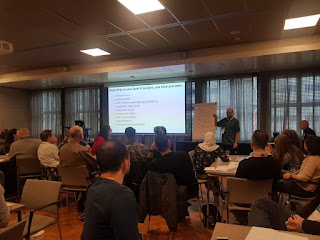 This year I attended my second EuroSTAR , in Haag, the Netherlands. Last one was 5 years ago in Gothenburg, so it was about time to re-visit this conference. The conference lasted 4 days, where the first 1,5 days were workshops, and 2,5 days of conference, talks and key notes - with a lot of social happenings and expo during the breaks. We were 5 in total from my company that attended the conference. Monday First day I attended a whole day workshop with Michael Bolton, "Analysis for Testers", which was very educative and reminded me to keep looking at the big picture and context of what we are testing. There were a couple of assignments that we did in the classroom, in groups, and while they could appear to be easy and straight forward, they created quite a lot of debate among the participants. Even though all in all this workshop was educative and fun, there were some improvement points that I will suggest for Michael, like having more group assignments during the middle
Read more

Does the language we speak shape the way we think?

- May 06, 2018
This week I have been looking a bit into whether language(s) we speak, shape the way we think? Being raised up bi-lingual from the age of 8, where I spoke mostly Bosnian and Norwegian with a good addition of English, this is quite an interesting topic for me personally. Inspired by a talk from Lera Boroditsky from TEDWomen 2017, who had done a lot of experiments on this, here is what I found out. If you find this interesting, I encourage you to take a look at the presentation, many examples that I mention here are taken from her talk. 7000 languages, different way of thinking? There are about 7000 languages, each different from one another, in many ways, different sounds, different vocabularies, not at least different structures, to mention a few differences. Whether a language affect how we think has been debated throughout the centuries. "To have a second language is to have a second soul", stated Charlemagne, which is quite a bold statement suggesting that language is
Read more